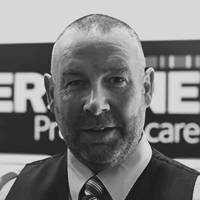 Derek is the Director of Care at Erskine, which is Scotland’s foremost provider of care for veterans and their spouses in their four purpose built care Homes.  He has been at Erskine since 2016.

Derek has been a mental health nurse for over 30 years, latterly as an Associate Nurse Director in NHS Ayrshire & Arran/Lead Nurse in North Ayrshire Health & Social Care Partnership posts he held after 22 years in NHS Greater Glasgow in Clyde.  In 2015 he was the interim Executive Director of Nursing, Midwifery and Allied Health Professions in NHS Orkney

Derek was a visiting Senior Lecturer at Abertay where he taught the leadership module on the MSc in Healthcare.  He is on the Editorial Board of the British Journal of Mental Health Nursing and on the NMC Professional Strategic Advisory Group.